Considering that apps can stay active even when you’re not using them (background operation), it’s important that you uninstall everything unnecessary to reduce battery consumption and improve device performance. However, the apps that come pre-installed cannot be uninstalled. In that case you may be able to disable them.

The result of disabling an application is similar to uninstalling. Although a deactivated app remains in the internal storage and is not deleted as in the case of uninstallation, it will remain “frozen”. In other words, you will not be able to use resources such as CPU, RAM or battery. It is also a reversible process. And since its data is not erased from the device, you can return it to its previous state after activating it again.

How to disable an application 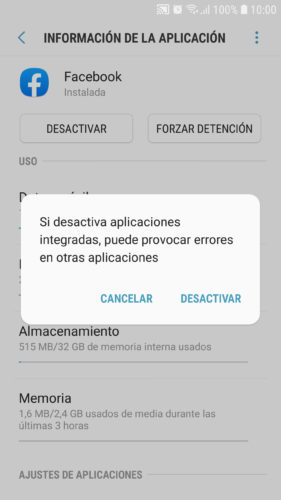 Go to the system app manager. Generally the path is Settings> Applications. When you tap on them, some of those applications will have an “Uninstall” button. Those that cannot be uninstalled or removed from the device will have the “Deactivate” button. Tap on that button and “accept” the warning “Disabling integrated applications may cause errors in other applications”.

To see other default or factory applications, touch the menu button that should be at the top and select “Show system applications”.

What applications can I disable?

Several Google apps and social networks, such as the following, should have the “Deactivate” button enabled and it is safe to deactivate them:

These are one of the “heaviest” apps on an Android phone. They generate a high battery consumption and can contribute significantly to slow down the device. If you can not do without them, look for light alternatives. For example, in the case of Facebook you should prefer “Facebook Lite” or visit the site from the browser.

You should also disable any other apps you don’t use. In my case I have disabled the following: S Voice, Samsung Gear, Google Play Movies, Music and Hangouts. Also Word, Excel, Power Point, OneDrive, Skype and Flipboard (Briefing). 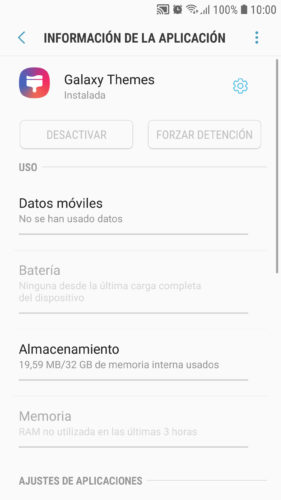 In the application manager you will find some that have the “Deactivate” button disabled. This may be because it is a critical system app or simply the manufacturer does not want you to get rid of it. It can be disabled anyway. Just be aware that if you disable a major app, you may see malfunctioning in other apps or system instability.

XDA-Developers has created a tutorial to force the deactivation of an app. Basically you will need to properly enable USB debugging on the cell phone. Then you will have to connect it to the PC with the USB cable and from the ADB program send the following commands:

If you see problems and want to reactivate the app you will have to use the following command:

Since this command lists all the packages on the device, you can filter the results with the following commands:

Instead of the word filter, enter the name of the manufacturer, operator, or application to find packages that include that term.

Unfortunately these commands may not have effect on certain devices. For example, I have not been successful disabling apps on an Amazon Fire 7 tablet. In this and other cases where you cannot disable an app you will need root permissions and a tool like Titanium Backup .

Although the process of disabling apps is reversible, beware of some that serve key functions. If you do not know what an app is about, it is better not to disable it.

You should also not deactivate the apps that serve to locate your Android in case of theft, such as slocation, Find my mobile or Google Play Services. The latter has even more important functions than the one indicated.