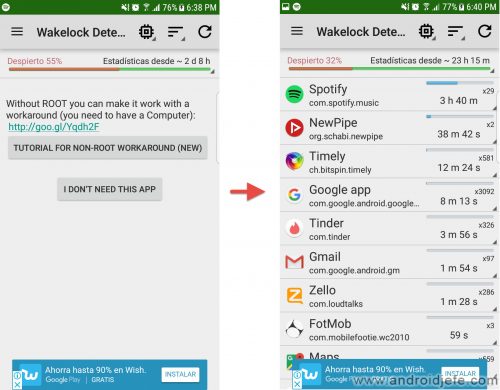 Its name may be a little scary but don’t worry. It is a very simple application to use and understand how it works. Wakelock Detector is available completely free of charge on the Play Store. It requires ROOT to work (if you don’t know what this is, see below how it can be used WITHOUT root). You can help us easily and effectively to know which Android applications are the most draining the battery.

So, this detector lets us know which applications are using this command to keep the CPU or the screen active. And how many times do they behave like this. This allows us to determine practically which applications are wearing the precious battery of an Android mobile the most, by requiring the activation of both resources.

After what has been explained, there is no mystery in how this application is used. When opening it, we can easily see which applications are using the processor or screen Wakelock the most. It also helps to know which applications make a Wakelock “spontaneously”. Even when they’re not open or running (Wakelock Launchers). Additionally you can see the applications that are running and their number of Wakelocks. You can also sort the apps in alphabetical order or by the number of times they have used a Wakelock.

Once we have determined which applications consume the most energy using this information, we can take action on it. Uninstall them, for example. You can also choose to freeze them with an application like SD Maid, which we have previously reviewed. Another option is to hibernate them, using an app like Greenify. It will all depend on how often we use the applications that we have found most abusive.

Find out how long the cell phone is “awake” consuming battery

An important note: at the top of the interface of the app we are provided with relevant information that is worth mentioning. There we can see how long the device has been active or “awake” consuming battery (section of orange color). You can also see how long it has been in rest or deep sleep without the applications having been consuming energy (green section). Check the images below. The before (when using this application for analysis) and the after taking the necessary actions indicated in the previous paragraph. Test on my Samsung Galaxy S3. 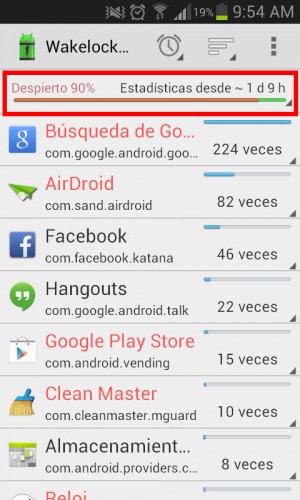 The savings was remarkable after that. I have achieved a minimum of 2 to 3 hours of additional charging.

According to the developer, after its installation it is advisable to have enough battery charge and wait at least two hours before obtaining reliable data from the application.

Wakelock detector can seem like a complicated application just by hearing its name; it is not as we have seen here. If there is any question about what it does, you can find a fairly timely FAQ in the application settings options. Regarding its effectiveness, it is really the best that can be found as a resource to IDENTIFY the applications that eat the Android battery the most . If the correct actions are taken after finding out that, we can achieve significant battery savings.

Wakelock Detector works without root on Android 4.3 and lower. In Android 4.4 or higher it is necessary to use the Wakelock Detector LITE version (link quoted below). There is also a special procedure to make this app work without root. Do not panic, because it is quite simple. And it is worth it, because as indicated in the entire article, thanks to it you will be able to see precisely what the cell phone battery is running out of.

Before starting, what you will need is a computer with the Chrome browser installed. 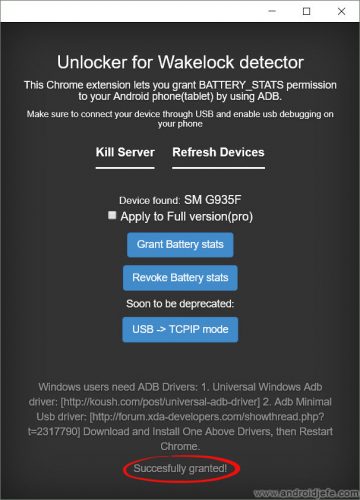 If the previous procedure does not work for you (the message “No devices” appears or something like that), the alternative is to activate the application using text commands. To do this, you will need the ADB software on the PC and have everything configured for sending commands to the cell phone. This article will help you. Then, connect the cell phone to the PC with the USB cable, open the ADB tool and you must send the following command:

You can also use the command  adb tcpip 5555

With that the application should already start showing the statistics.

How to avoid background apps on Android 7+ (NO root)

The screen is running out of your cell phone battery, but there is a solution

How WiFi influences battery consumption and how to control it