The concept is simple: that the screen of the Android device becomes a touchpad , where moving your finger means moving the computer cursor (or touching it has the same effect as a left or right click), and where a virtual keyboard where everything you type is entered in a text field on the PC.

To use an Android device as a mouse and wireless keyboard for the PC, you only have to do two simple things: install a program on the computer that receives the data sent by the mobile phone (server) and on Android the application that will send that data (client) .

Currently there are several free solutions for this, which are offered by both the server and the client and which do not require complex configurations to start using the screen of the Android device as a trackpad and as a virtual keyboard for the PC. Listed below are those that we consider best.

Super complete application that not only offers the mouse and keyboard function, but also has a joystick function that emulates a video game controller on the Android screen and uses the device’s motion sensors to control PC games. It even allows you to explore the files on the hard drives of the PC and duplicate the computer screen on the mobile.

Monect is free. To use it you just have to install the server on the PC (Windows only) and the client on Android. They both open and voila. No configuration is necessary. This application works under Wifi (PC and Android must be on the same network) or Bluetooth.

It offers many functions: wireless mouse and keyboard both via Wi-Fi and via the Internet, a remote control for multimedia control and turning the computer on and off, a PC file manager and special controls to control applications such as Spotify, VLC, Windows Media Player and other 70 programs. plus.

Similarly, the server is installed on the PC (Windows, Linux, Mac, Raspberry Pi or Arduino Yún) and the client is installed on Android. If both computers are on the same Wi-Fi network, the application can be used immediately. For control via internet it is necessary to configure the server, from the Android application. 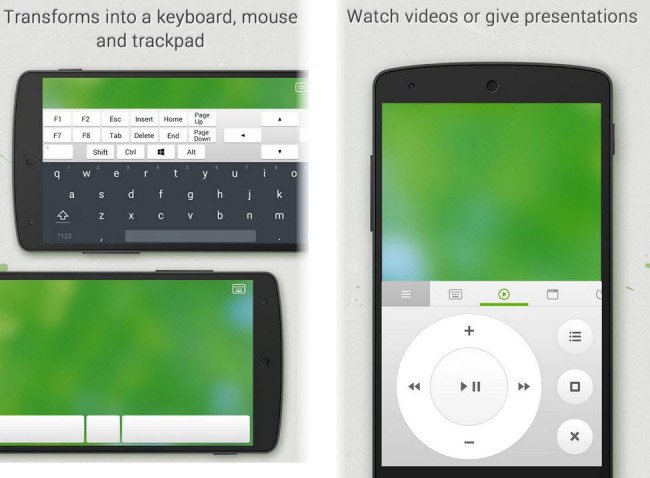 Another fantastic application that, in addition to offering a touchpad and virtual keyboard, also offers multimedia buttons that, for example, allow you to increase the volume of your PC or change songs and / or video. It also offers controls to shutdown or hibernate the computer.

It is completely free and does not require any additional configuration. All you have to do is install the server on the PC (Windows or Mac) and the client on Android. It is necessary that the PC and the mobile are on the same Wifi network. Remote Mouse also works under 3G connection.

Open source application (“Open Source”) that only focuses on offering mouse and keyboard functionality. It has a great reputation.

The server is run on the PC (Windows, Linux or Mac) and client is installed on Android. The RemoteDroidServer.jar file is run on the computer . It will show an IP address (four groups of numbers separated by dots), which must be entered in the Android application and click on the “Connect” button to finish.

In addition to keyboard and mouse, it has interesting functions such as specific buttons to scroll up and down, specific buttons for the browser and to turn off, suspend or restart the computer. It also offers a virtual keyboard identical to that of the PC, support to control Power Point slides, view the PC desktop, among other functions. It is compatible with Windows, Linux and Mac.

The server (host) can be installed on Windows and Linux. It works under Wifi or bluetooth. It is free and, interestingly, it offers the option to capture a PC screen from the mobile device, in addition to the keyboard and mouse function.

Unfortunately the official website of this app skynetsoftware.com/myControl no longer exists.

If you only need to use Android as a wireless mouse and keyboard for your PC, it is best to use “light” applications such as RemoteDroid or Remote Mouse. Feature-rich apps like Monect PC Remote or Unified Remote should be used only in case you are going to take advantage of everything they offer, or at least most of their features.

Manage the PC from the Android cell phone

5 APPS to control Android from PC