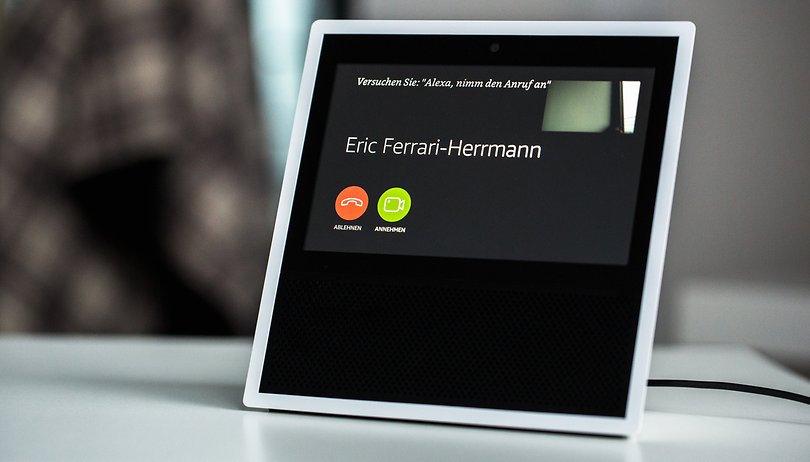 Video telephony is child’s play with the new Amazon accessories. I am usually critical of smart home accessories. I am not a friend of the idea that a camera and a microphone are aimed at my friends, family and me in every room of my apartment. I also don’t think it’s a good thing that we are letting more and more devices into our lives that only one company can understand and that even state authorities are left powerless. But this drop-in function and the Alexa-initiated video calls with the Echo accessories are simply seductively good.

Our Echo Spots test devices have arrived in our editorial office. They are the little brother of the Echo Show , so they have a small display, simpler audio equipment, but also a small camera and a modern microphone array. This makes them suitable for video calls on demand. This can only be done with Alexa devices or apps, but after the first try it turns out to be no obstacle.

After many attempts and unsuccessful attempts to make friends with the devices of the Echo family from Amazon, the knot has now broken. Echo Dot and Echo were nice attempts, but due to the lack of accuracy of the speech recognition and especially because of a lack of immediate added value, they never worked for me.

If I had wanted to benefit from Alexa, it would always have involved a whole lot of follow-up costs. In particular, the smart Philips lighting, Zigbee thermostats, smart locks and so on quickly add up. They increase the comfort at home, but I’m somehow not lazy enough to see all of this as added value for me.Opinion by Eric Ferrari-HerrmannI’m not lazy enough for voice-controlled lighting.Do you agree?5050516 participants

And that’s exactly why I never saw a reason to buy an Echo Dot. I cannot use my music streaming service with it. It doesn’t sync with my favorite Google calendar. I don’t use a single Amazon cloud service. The complete Amazon cosmos is foreign to me and I simply feel completely out of place in my previous usage habits when I am supposed to work with an Amazon device. But now this book trade suddenly comes with a product around the corner that gives me a completely new perspective.

While Amazon initially wanted to implement the screenless Echo devices, Echo Show and now the compact Echo Spot devices come on the market that offer immediate added value. Once synchronized with your address book, you can call all your friends on call. Thanks to the finally available screen and the built-in camera, you can see each other. The best thing about it: You can reach your friends on the go, because the Alexa app can also accept calls from Echo devices. If you say “Alexa, call Max Mustermann”, it rings on all of his devices.

At the press event, we were told that Amazon still did not want to give the feature to third parties. So we don’t have to count on a Skype, Telegram let alone Hangouts skill: Amazon keeps video telephony in its Alexa ecosystem. However, since the Amazon app works on almost all smartphones and makes the feature available on it and almost everyone has an Amazon account anyway, I no longer see a hurdle that Amazon has created a perfect incentive here.

If it has been activated for the respective Echo device, you can simply switch on the camera via drop-in. As with an intercom, the Echo Spot can be activated spontaneously in a room, as if you were calling and looking through an open door.

So that it does not become embarrassing, the drop-in function can be switched off and the microphone can be deactivated together with the camera at the push of a button. Then the viewer only sees the message that the camera is deactivated. While I find the drop-in for echo spots in bedrooms somewhat tricky, I can imagine them in common areas such as the hall, kitchen or living room.

In the coming days I will take a closer look at the new Alexa hardware. I still haven’t looked at all the features whose list with the Echo Spot got a little longer. Until then, I look forward to your questions and suggestions, which I should incorporate into the test. Do you already have a smart assistant at home? What are your experiences with it? And what features are you missing so far?