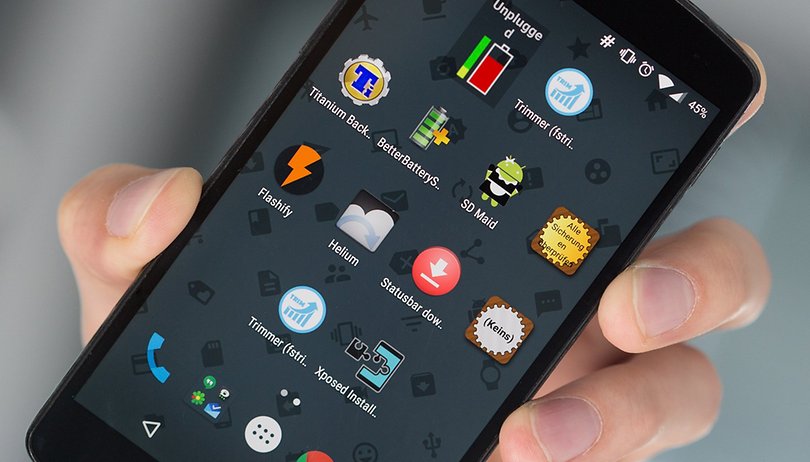 Root rights grant you access to all functions of the smartphone. To get the most out of them, you can choose from the following apps. These take advantage of the super user privileges and help you get the most out of your rooted Android smartphone. Update: We have thrown two out of date apps out of the recommendations, but with Magisk and Kernel Manager two new practical applications for you.

How do I root my phone?

To root Android, you need to find a reliable, tested guide for your smartphone. You also have to be prepared to take some risks. You can learn how to find the right contact point in the AndroidPIT community and which pitfalls you need to be aware of in our rooting guide .

In line with the release of CyanogenMod 14.1 , Open GApps is introducing its new app. This offers a few advantages to the project website. This makes it easier for you to download the right Google apps for you with the app, because it automatically recognizes the processor architecture of your smartphone and the current Android version – so it saves a little research.

With root access , the free app becomes even more practical. Then you can initiate the installation directly from the app interface, instead of laboriously handling the recovery. The cache is also automatically deleted and the permissions are reset – both common sources of error with Android 6.0 Marshmallow and newer.

As soon as you have rooted your smartphone, you only need to install the ROM Toolbox and you are the absolute smartphone professional. Because the Toolbox connects everything you have unlocked by rooting your smartphone.

Changes the kernel, backs up your data, moves apps to the SD card, changes the boot screen, freezes apps in their current state, creates autostart scripts, changes the processor configuration and much more. The Pro variant costs 5.25 euros.

One of the main reasons for rooting is that you can finally get rid of the apps you don’t use. But this is not without and can lead to massive error messages. That is why you need the opportunity to undo your mistakes.

The root app System App Remover forgives errors. You can restore deleted apps if errors occur. If everything goes well, you can delete the backup data and free up memory.

Trimmer optimizes the flash memory and makes the smartphone faster

You may know the phenomenon that your smartphone feels slower and slower over the years. It gets really dramatic when the flash memory is almost full. Because then the control electronics must clean up the data blocks, rearrange them and so on.

Optimizes recently shared memory with the trimmer. Access times will be significantly reduced. The free root app Trimmer actually only executes one command that your smartphone can master even without an app, but who likes to type commands in white-on-black consoles?

If you really want to troubleshoot, you will soon reach the limits of Android consumption statistics. Because Google Play services are often declared a scapegoat there. In reality, it was a third-party app that keeps calling the play services. This is not unraveled in Android’s battery statistics. So you need a better tool.

The root app BetterBatteryStats promises improvement, which significantly increases the level of detail and allows more accurate error reports. If you are an app developer or want to support them in their work, these statistics are essential.

When moving from one Android smartphone to the next, it is particularly troublesome that you have to completely reconfigure your apps. Very few apps save their configuration online, and a backup can only be initiated from some apps. This is a huge shortcoming of Android, which various backup apps can avoid. The best of them is the Titanium root app.

If the popular competitor Helium Backup stops before the app data from WhatsApp, Titanium saves it to you in the cloud without batting an eyelid. All of your data stored in the internal storage also goes to the cloud or to an SD card, if you want.

Several additional features, such as the important cloud backup, will only be available with the PRO version for 6.49 euros. However, it has not been updated since 2014 and can only be used for old devices.