Much commotion has arisen around the fact that one of the most popular phones right now, the Samsung Galaxy S5, uses too much memory or internal storage for the Android operating system, leaving free “little storage available to the user” or real storage, effective. Is this a problem solely related to the new Samsung smartphone, or is it that all the new cell phones that come out from now on, including the recent Xperia Z2, will have this problem?

To be more explicit in this regard, the blog Telekom-presse.at has revealed, with the Galaxy S5 in hand, that the real or effective memory, that is, the one that can be used by the user, is approximately 10.7 GB in the model 16 GB. In other words, it tells us that 5.3 GB of the total internal memory is being used by Android 4.4.2 KitKat, which is the operating system that is factory installed on the device. 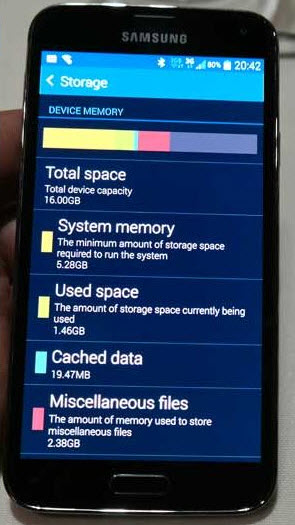 What is the difference between this and, for example, the memory available to the user on the Sony Xperia Z2, which will be the respective representative of the Japanese company this year, a direct rival to the Galaxy S5? Well, according to the official “White Paper” of the device, document in which “the smallest detail” is revealed, it is specified that the mobile phone has 12 GB of real memory, that is, in the 16 GB model too, 4 GB They are being used by the Android 4.4 system that comes installed on that cell phone, from the factory.

Effective memory on the Sony Xperia Z2, according to its White Paper

The difference between the memories that they offer from both is really remarkable: they are 1.3 GB of difference between what one offers and the other as internal memory that the user has available. Now, of course, it must be clarified that, in the case of the Xperia Z2, this data has not been confirmed as real; This is the manufacturer’s specification, which sometimes may not be as accurate.

Of course, this is not something new. The internal memory specified by the manufacturer is never the same as that available to the owner for installing applications and saving files. The amount of memory used by the OS must always be subtracted from the manufacturer’s data. In this case, as each manufacturer uses a customized version of Android, which includes the installation of proprietary applications, it varies from one to the other.

Is this a decisive factor when deciding on one or the other? Well, it’s not just a few MB of difference; They are 1.3 GB that would be very beneficial for the user, which is why, if it could be considered an important factor, although not decisive. For now, it is another point against the Samsung Galaxy S5 that, remember that it also comes with 1 GB of RAM less than the Xperia Z2.

How to see what occupies SPACE of storage in Android