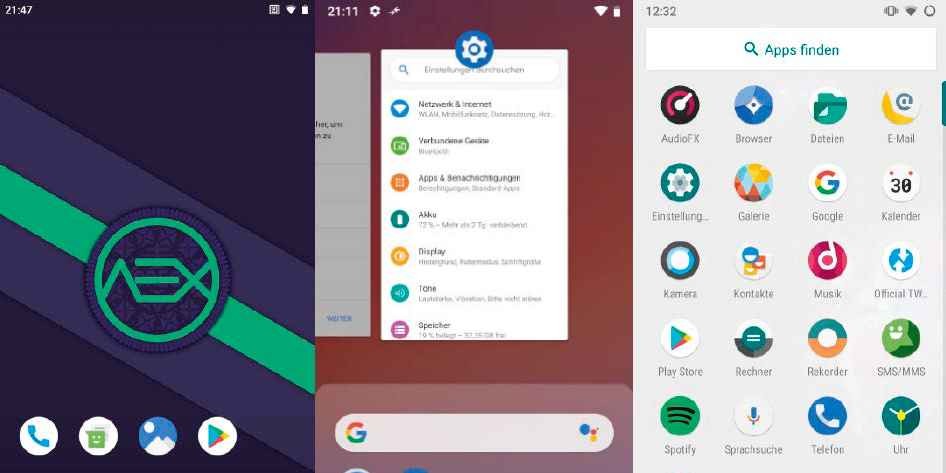 For most smartphones, there are no more operating system or security updates two to three years after the market launch. Older, former blockbuster models still have the chance to receive updates via custom ROM.

EnlargeWe present the most common custom ROMs and compare them with each other.

Many users continue to use older smartphones, for which the manufacturers have long stopped updating. This is also confirmed by statistics from Google , according to which the already five year old Android 5 is still used by around 14 percent of all users. The reason: Many of the older smartphones are still in good shape, and if you only use them for WhatsApp, emails, listening to music and making calls, most devices are also powerful enough. However, they no longer receive security updates and are also excluded from other innovations.

This is where the custom ROMs come into play: based on the Android Open Source Project (AOSP) , which is provided free of charge by Google, they offer you a secure basis with regular updates. The range of custom ROMs is more or less extensive, depending on the smartphone model. We have selected some popular older models from Google, HTC, Motorola and Samsung and are presenting the matching custom ROMs.

The first port of call: the XDA Developers Forum

EnlargeIn the sub-forum “Moto G” of the XDA Developers Forum there are numerous different custom ROMs for the Motorola smartphone to choose from.

Android 9 has been on the market for a good year. This is also noticeable when looking for a suitable custom ROM, because most custom ROMs are based on it. A good place to start when looking for an updated operating system for your smartphone is the XDA Developers Forum . This offers the appropriate custom ROMs for a variety of smartphones, newer and older types. The operators of the forum structured it very well according to manufacturers and among them according to the available models. There are then various defined areas for each smartphone and tablet. The available custom ROMs and the corresponding discussions can be found in the “Android Development” section.

The best smartphones under 300 euros!

Unfortunately, the logic does not work at Sony – at this point there is no overarching structure, but rather the forums arranged according to model series. If you have found the right forum for your smartphone there, you will surely be surprised at how many different custom ROMs are available.

The number of custom ROMs available is constantly changing. New representatives are added, established versions give up and then come back after a year or two. The developers of the custom ROMs generally use AOSP (Android Open Source Project) as a basis and supplement this with their own functions.

Especially when a new Android version is released, many of the published ROMs are still quite unstable. In the meantime, the custom ROMs based on Android 9 have achieved a good degree of stability, so that they can also be used safely in day-to-day operation. The selection is of course dependent on your smartphone model, but ten and more different custom ROMs are usually not uncommon.

So that you can get a better idea of ​​the six more closely examined custom ROMs, we will briefly present them to you and then proceed to the analysis and recommendation.

EnlargeThe basis for most custom ROMs is the free Google-provided AOSP.

AOSiP: The situation is similar at AOSiP . The symbol of the custom ROM is an owl, which also looks at you as the background of the start screen after starting and strongly reminds of the pixel screen with the search window. For better clarity, the developers have summarized the setting options in the “Owl nest” item. At this point you will find a total of eight categories with which you can customize the Custom ROM, including the status bar and the definition of gestures.

EnlargeAOSP ROM Extended convinced by its simple design, combined with a variety of options for customizing the appearance and functions.

AOSP Extended ROM: The developers of AOSP Extended ROM have put even more effort into some places so that you can adapt the operating system to your needs. If, for example, you don’t like the rather striking background image of the start screen, you can use AEX Papers to choose the right one from a larger selection of alternative images.

The setting options are clearly arranged in six categories: from the status bar to navigation and various system extensions.

EnlargeThe main additional features are hidden for Cypher AOSCP in the menus “movements” and “buttons”.

Cypher AOSCP: If you want to adapt your smartphone more closely to your own requirements, and you have already optimized the use of apps on your current device or upgraded a gesture control, then Cypher AOSCP offers the appropriate range of functions.

The custom ROM comes with a clear and structured interface. The details are hidden in the settings behind the two menu items “Movements” and “Buttons”. You can use these to adjust the buttons on your smartphone, for example to take a picture faster. With the “movements” you can also determine which gesture you use to switch to the camera quickly or how you put your smartphone into standby mode.

EnlargeLineage OS convinced by its simple appearance and ease of use. It is not without reason that it is one of the most popular custom ROMs.

Lineage OS: The classic is Lineage OS , which succeeded Cyanogenmod in 2016. The current version 16 corresponds to Android 9. The custom ROM is very much based on the Android standard and has only implemented a few additional functions such as system profiles. With these you can individually set various parameters, such as the volume of the ring tone, depending on your environment. In the standard, Lineage OS comes without a root function. This means that the banking apps and streaming services can also be operated without any problems. However, if you absolutely need root access, it can be easily installed using a zip file.

Zoom InThe developers of Pixel Experience have made great efforts to incorporate the appearance and handling of the pixel devices into their custom ROM.

Pixel Experience: The name Pixel Experience says it all . On the website, the developers describe their implementation as ROM, which brings many functions of the pixel phones, such as the appearance and the animations, and which the Google apps have already integrated.

Accordingly, the custom ROM greets you directly after installation with Google’s typical screen and the associated search window. Functions typical for pixels, such as the new arrangement of currently open apps, are also available. Despite everything, Pixel Experience does not appear overloaded and is easy to use after a short familiarization period.

Resurrection Remix: The custom ROM was first released in 2012. The surface appears with the round symbols typical of pixels and leaves almost nothing to be desired in terms of configurability.

The developers have summarized the options within the settings under “Resurrection Tools”. On a variety of tabs you can customize almost everything that is available in your Android system, such as the status bar, the user interface and the buttons.

If, after this idea, you are still undecided which Custom ROM might be suitable for you, you should simply answer a few questions: Would you like an operating system that is strongly based on the Android standard and does not offer any large setting options or additional functions? Or do you want exactly the opposite and are happy about every opportunity to customize your smartphone? Basically, the daily use of your mobile device is an important decision criterion. We tried to pack this into three different usage profiles.

Occasional users do not always use their smartphones every day, and if so, for a short phone call or a message if the train is late. The smartphone is a pure commodity that should work. This user rarely uses the settings of the smartphone, mainly when a new WLAN needs to be set up. The number of apps installed is rather small.

On the other hand, the normal user uses the smartphone more often, using it for example for social networks like Facebook or messenger like Whatsapp. Shopping via Amazon, Zalando & Co. is also occasionally carried out on the smartphone when there is a waiting time on the go.

The user with high individuality has optimally adapted and optimized his smartphone to his needs. He controls various actions using gestures and has also installed various additional apps for this. This type of user is also familiar with the settings of his smartphone and has already experimented with the various functions available.

EnlargeThe developers of AOSiP have chosen the owl as a symbol of their custom ROM. Accordingly, the settings can be found in the “Owl’s Nest”.

Of course, the three groups cannot be separated exactly, and it may well be that you would classify yourself between casual users and normal users. The subdivision should also only give you a rough classification so that you, as an occasional user, do not accidentally install a totally playful custom ROM and thus only become unhappy.

We selected the six representatives presented above from the range of custom ROMs because they have been on the market for a long time. They offer support for numerous smartphones from different manufacturers and receive regular updates.

Since it was difficult for one or the other custom ROM to clearly assign it to one or the other user group, there is a recommendation for occasional users as well as for normal users for LineageOS and Pixel Experience. The situation is similar with the AOSP Extended ROM: We can imagine this well for normal users, but also for users who need a high degree of individuality.

In the end, however, a normal user could also be happy with Resurrection Remix, for example – he doesn’t necessarily have to use the additional functions.

Availability of the custom ROMs: Pay attention to the code names!

Perhaps you have already made a preliminary selection and you will find yourself in one of the three user groups. This gives you a rough idea of ​​which of the custom ROMs you might consider. The next step is to check whether these are also available for your device. There are two contact points for this: the XDA Developers forum and the Custom ROM website. We examined a total of 17 smartphones for you and prepared our results in the following table. An “X” means: You can find the latest version of the custom ROM at XDA Developers. And a “W” stands for the website of the custom ROM. If there is a “-” in the corresponding field, the custom ROM is not offered for the corresponding device.

Attention: You will usually find the smartphone models listed under their code name or the exact model name! We then noted this in our table. Because most manufacturers offer a device in different versions, such as an LTE version or with dual SIM. When choosing a custom ROM, be sure to download the correct version for your device. Which exactly you have, i.e. the exact model number, can be found in the settings under the phone information. In addition, Android 9 is not always available, sometimes only the older versions of Android 7 and Android 8 are available. This was noted in the table.