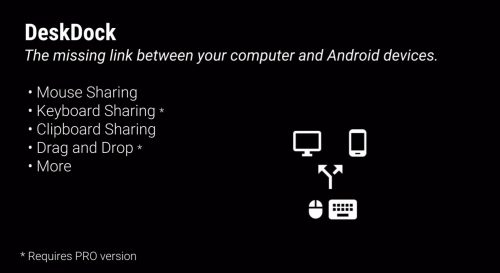 Tools to view or control Android from the PC, such as Vysor, facilitate the work between both teams. Another similar software to improve productivity is DeskDock. Basically, it allows to use the keyboard and mouse of the PC in the Android mobile, in such a way that both teams can be controlled interchangeably with these two peripherals. It is like integrating the two devices into one.

DeskDock allows to unify PC and mobile, and control both interchangeably with the same computer mouse and keyboard.

This utility may be much more useful than it sounds. Often you tend to be aware of the mobile while working or doing something on the PC. Being able to answer messages, calls, take a look at apps, etc., can be easier and faster using the same computer mouse and keyboard.

If the PC is Windows, you will also have to install the USB (ADB) drivers of the Android device. These can be downloaded from the manufacturer’s page or, easier, install this universal driver. 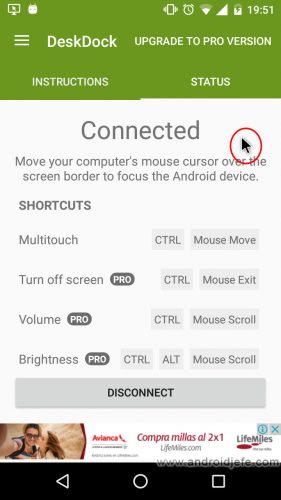 To control the mobile, move the PC pointer to the bottom right of the screen, to “outside” of the screen. The pointer will automatically appear on the mobile screen. In this way, the cursor can move from one computer to another, as if it were a single device. 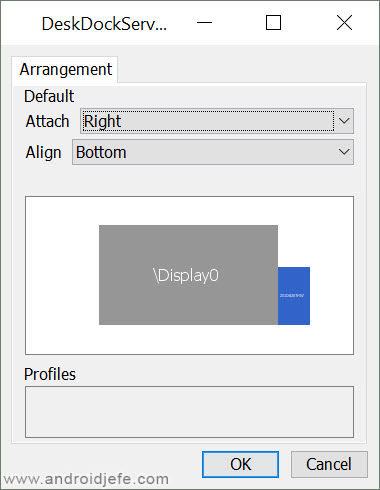 Some tips when using DeskDock

Some of these shortcuts can be “re-mapped” to assign other functions to them. Just go to the application settings, “Key Mapping” option.

The Advantages of DeskDock PRO

In the paid version of the app, DeskDock PRO, there are crucial features. Perhaps the most important is the one that allows typing on the mobile phone with the PC keyboard. Another very good one is the one that allows you to drag and drop files from the PC to the Android. You can also drag URLs or APKs that are installed automatically.

The PRO version also offers additional keyboard shortcuts. You can turn off the mobile screen, increase the volume or adjust the brightness of the screen. It would be good if the programmer also implements a shortcut to take screenshots.

The cost of DeskDock PRO is $ 5.60 on Google Play. It can be purchased from the same version for free.

Conclusion
I have personally found it quite productive to work on PC and Android simultaneously thanks to DeskDock. I have not found any fluency problem or anything like that. It has been very useful to work on the PC and answer WhatsApp, Facebook (one more alternative to PushBullet), calls, or an app is reviewed. Hopefully in the future the app will allow a wireless connection, which would make it much more practical.

5 APPS to control Android from PC