Several months ago, the Xiaomi company began to block the bootloader of its devices. Currently several of its models come in this state, including the Xiaomi MI 5. A locked bootloader can have certain advantages for the user, but in case of problems with the phone (which are possibly more “realistic” than the benefits), it becomes in the worst obstacle to deal with. Before buying a Xiaomi, this is an important detail to know, mainly considering how common or typical software flaws are in smartphones.

What is the bootloader

The bootloader or bootloader is a master software that basically is responsible for controlling the power on of the device and the modification of the operating system. In a very elementary way, a locked bootloader does not allow third-party software to be installed or flashed on the mobile, such as installing unofficial patches or an operating system that is not the original from the manufacturer, to prevent the device from being damaged or damaged. compromised user data. In that state you can NOT get root or install a custom recovery, for example.

The problem of a locked bootloader

The drawback is that in Xiaomi devices, that the bootloader is blocked is a gigantic limitation if the cell phone at some point does not want to turn on normally due to improper manipulation of the software or some unintentional error on the part of the user. If the mobile gets stuck in the logo restarting in an infinite cycle, practically all solutions to this failure are useless.

When the bootloader is locked and the team would not turn down a bug in the Android system, the user can not reset it from from the start mode  Recovery  ( Recovery ) and not from a computer, two procedures that apply to other devices and allow easily retrieve them in those ways (1, 2). Recovery mode is inaccessible on these Xiaomi devices with locked bootloader and control from the PC using text commands is rejected. 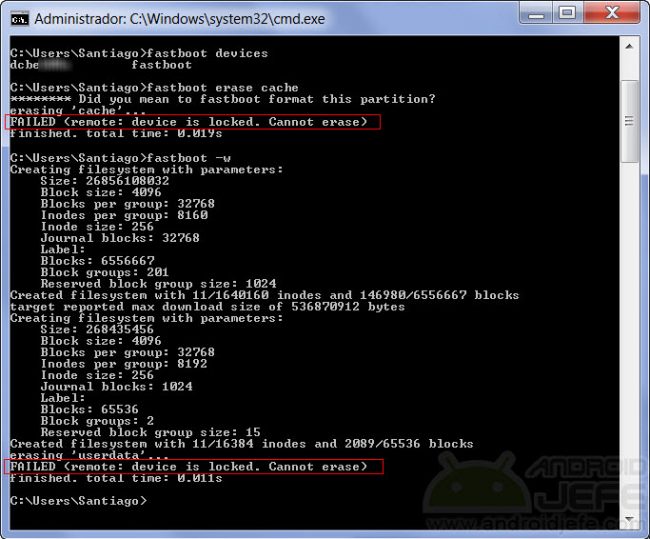 It is assumed that even though the bootloader is locked, you can still reinstall the original Android system on these mobiles, which would fix the mentioned problems. In fact, Xiaomi has a website where you can download the firmware or ROM for several of its models, but unfortunately it does not help much because this firmware cannot be installed or “flashed” with the MiFlash or MI PC Suite programs, which is the software used for this procedure. The reason is that, in the case of MI Phone, the blocked bootloader rejects the reinstallation of the ROM (although it is official) and in the case of MI PC Suite, it has bugs: it requires updating the equipment previously (although the equipment is already updated) or requests that you start the computer in normal mode first (absurd thing if the computer does not start normally).

The solution when the Xiaomi computer with locked bootloader cannot start normally is probably to unlock the bootloader first (assuming this is possible on a damaged or brickened device ), and then proceed to restore it from Recovery mode or from a PC. For this the user must ask the Xiaomi developers to help him unlock the equipment, explaining the reasons why he wants to do this. And once the application is done (indicating a data pair and a phone number to receive a verification code), approval to unlock the bootloader can take up to several weeks. This is more complicated than what happens with Motorola, for example.

This situation of the phone being seriously damaged at the software level can occur when deleting something improper on the computer or deactivating an application (as in my case, having disabled the Xiaomi App Store). It is better to be very careful if you touch what should not be on the computer if the bootloader is locked. Before you want to experiment, it will be best to have it unlocked so you can restore your computer in case things don’t go as expected.