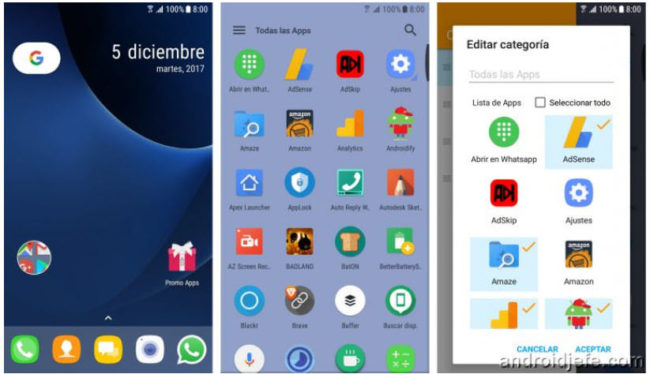 The main objective of making the applications (their icons) invisible on Android is that only you, as the owner of the phone, know of their existence and can open them.

The idea is to make the shortcuts of your applications invisible on the desktop or main screen. Those shortcuts will actually be there, but they won’t be visible (you’ll need to remember their position on the screen to tap them and open the apps).

How to make invisible icons on Android

In Icon : Select icon > Others > None

Under Label : A trash can will appear. Tap on it to delete the application name

Finally touch on the OK button

Don’t forget to hide the apps in the menu

Once the application is invisible on the desktop, you must also hide it in the applications menu so that it cannot be accessed from there. In this case you must go to the apps menu of your cell phone and look for a menu button that allows you to enter its settings and look for the option “Hide apps”. In case you can’t find it, install a launcher that does offer this option. The one shown above in the illustration is ADW Launcher 2. In our article on Hide Android apps you can find other launchers and the exact steps to hide.

They are not completely invisible

The only downside to the suggested solution is that the apps will continue to appear in the system app manager (Settings). So that they do not appear there, the alternative is to isolate them within another application. That is the job that Folder Safe does on the Samsung Galaxy. Parallel Space could also be used for the same purpose, although its purpose is different.

How to HIDE Android apps

The ultimate solution to an icon-filled home screen

How to HIDE contacts on Android