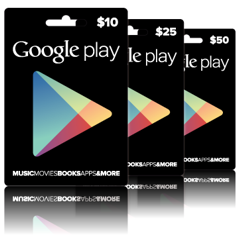 You can find out everything you need to know about Google Play gift cards or gift cards here and how to deposit your credit here. The prepaid cards are cards that can be bought in retail stores. Apple has been offering this with its iTunes cards for a long time, now Google is also sending these cards to Google Play for Google Play after it has been possible in the USA for months. In this article you will learn how you can top up your credit in Google Play so that you can use these voucher cards / gift card apps or in-app purchases.

NEW: How to redeem the Google Play card and frequently asked questions !

In Germany, payment on Google Play was previously only possible by credit card or with selected mobile operators. The majority of Google Play users, however, could not use these functions. Young people in particular do not have a credit card. It is therefore a logical step that Google now also offers Google Play cards in Germany, after all, Germany is a large market. Accordingly, sales at the app developers will now increase strongly again, because with these voucher cards / gift cards you can quickly buy them for cash and then enter the code to top up your Google Play balance.

In this article we want to show you how you can redeem the Google Play cards and thus top up your credit. With this tutorial, you should no longer have any problems buying attractive apps in the Google Play Store. You can also use it to buy music, books and films.

Who is wondering: At the top right of the article we have cards with dollars. In Germany these are of course issued in euros. There are Google Play gift cards with the values ​​15 euros, 25 euros and 50 euros. It is not yet certain whether additional credit cards will be added.

Finally, you might think, Google is bringing Google Play cards to Germany. These have already been sighted in some markets and can now be entered in the Google Play Store, more on that later. But there are some questions that will come with these new Google Play cards. We want to give you the answers.

Below is a tutorial on the new Google Play cards, where to buy them and how to redeem them.

Problem: I cannot pay with the Google Play gift card

A common problem that we are asked again and again is the fact that you have topped up your Google Play balance, but now you cannot buy an in-app purchase or an app. Where is the problem?

With Google Play, the developer can set the prices for the individual countries. But if this only sets the dollar prices for the USA and no price in euros for Germany, then you cannot pay with the prepaid card in Germany. There, for example, only the credit card is then available as a means of payment.This could be of interest to you   Our smartphone recommendations for Christmas 2019 – Find out more!

At least that’s our explanation why you can’t pay for some apps with the gift card on Google Play.

Where can I buy Google Play prepaid cards?

Do you know of other markets that Google Play Maps will offer? Then just get in touch in the comments!

Tutorial: Redeeming the Google Play cards – top up your credit

Did you get a Google Play card? Then of course you want to redeem them and top up your credit in Google Play. Google really solved the whole problem. There are even two ways to redeem the code.

The Google Play cards can be redeemed quickly and easily via the Google Play Store app. First open Google Play. Then at the top right on the 3 white dots (or using the menu button on your device) and find the item “Redeem” there. With us this in the third place. Now you only have to enter the code and redeem it.

2nd variant: Via the PC

Of course, it is also possible to redeem the Google Play prepaid cards on the PC. To do this, simply go to this Google page and after a short login you can also enter the code in your Google account.

No matter which variant you enter the code of your Google Play card, finally everyone can buy apps, music, films and books on Google Play without using a credit card. Google has finally closed the gap and sales from Germany should rise sharply.