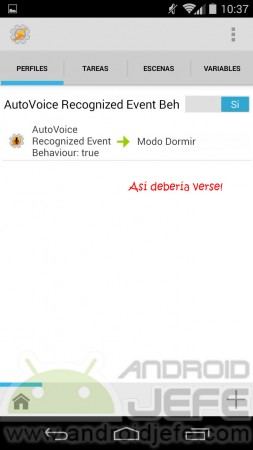 Google Now, the voice assistant integrated in the Google application, allows you to instruct the Android device to perform basic actions (make calls, send SMS or take notes, for example) using voice commands. Google Now only understands certain voice commands pre-set by Google and can only assimilate one command at a time. To overcome this limitation there is AutoVoice, an add-on to the Tasker application that allows you to create unique voice commands (with your own words) that perform advanced tasks, and which can assimilate several commands at the same time.

AutoVoice does not work alone. It works in conjunction with Tasker and they both depend on Google Now. The combination of these three applications can, for example, turn off the PC from the Android device using a command “Turn off the PC”, or turn off the wifi, bluetooth and mute the phone in one go with a voice command that could be something like “sleep mode”.

AutoInput: Automate and control your applications without touching the screen (via Tasker)

Basically these three apps work in this order: Google Now> AutoVoice> Tasker . The user utters the voice command in Google Now, and AutoVoice together with Tasker are responsible for verifying if the command is correct and executing the respective command.

The limitations? Everything will depend on Tasker. If something can be automated in the Tasker app, then it can definitely be controlled by voice with the help of AutoVoice and Google Now.

How to use AutoVoice

It is a Tasker plugin so you must first understand how Tasker works. This is an automation application that is managed under the concept condition > task . If a certain condition is met, the application automatically performs a certain task. In this case, the condition will always be a voice command, which will trigger a specific task. AutoVoice is in charge of handling the reception of voice commands, so when creating a profile in Tasker (condition + task), it will always be necessary to set AutoVoice as the condition.

Before starting, once AutoVoice is installed you have to go to the Android Settings, Accessibility option , and there check the box for the AutoVoice Google Now Integration service . Leave the service activated on the next screen. Additionally, go to the Tasker application Preferences and, in the Miscellaneous block , leave the Allow external access box checked .

Example
(It is assumed that Tasker and AutoVoice are already installed, in addition to Google Now working). Saying the voice command «sleep mode» (condition) wants to disable wifi, bluetooth and the sound of the doorbell in one go (task). For this, in Tasker you must go to the Tasks block and press the «+» button to add a new task. Give a name to the task and then add one by one the actions of the off wifi ( Network> Wifi ), bluetooth off ( Network> Bluetooth ) and deactivate the ringer ( Audio Settings> Silent mode ). 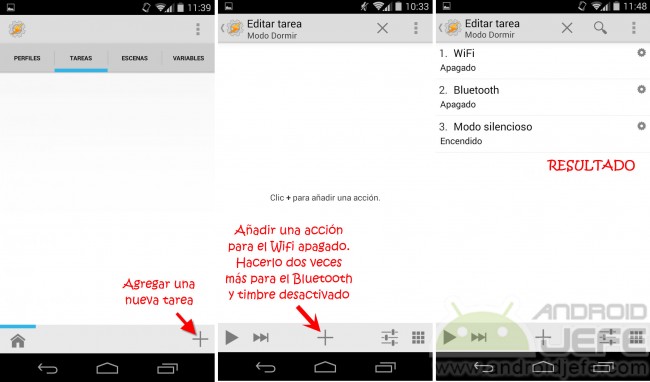 After completing the task, return to the main Tasker screen, tap on the Profiles block , and add a new profile with the “+” button at the bottom. Choose State> Plugin> AutoVoice> Recognized . On the next screen, tap on  Settings . AutoVoice will open and there you only have to do two things: activate the Enable Behavior option and, in the Comment Filter option , write the word Sleep mode . 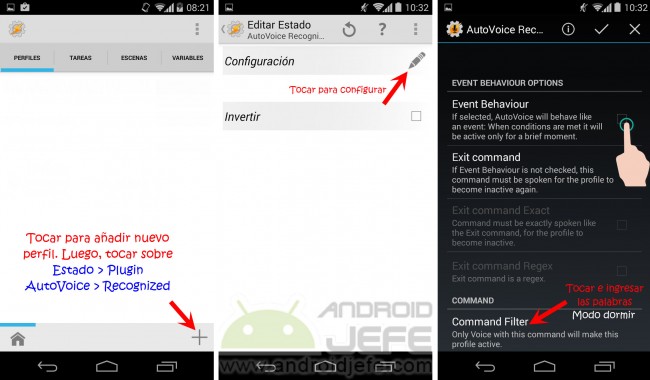 Creating the profile in Tasker and configuring the voice command “sleep mode” in AutoVoice 2.0.26

Save the changes (using the one seen at the top), return to the main Tasker screen and, in the box that will be displayed, choose the Sleep Mode task that was configured before.

To test this example, open Google Now and say the word sleep mode . This should disable wifi, bluetooth and put the phone on mute or turn off the ringer.

Download AutoVoice
AutoVoice is on Google Play. The free version only allows you to configure voice commands of up to four characters. To overcome this limitation, you must buy the paid version. Remember that you must have Tasker installed ( tasker.dinglisch.net ) and have Google Now working to use this application. By itself it does absolutely nothing.

Commandr
This application is a great alternative to AutoVoice, for novice users. Does not require a Tasker. Here it is no longer necessary to create commands and do everything indicated before because the application already comes preloaded with voice commands for various tasks. Once activated in Android Accessibility , it’s all a matter of opening Google Now and saying one of the supported commands. It is free on Google Play.

How to write messages by VOICE on Android

How to dial by voice WITHOUT having internet connection