Although you can NOT send files via Bluetooth between iPhone and Android , you can pass your photos, music and files between both devices in a very similar way (direct pairing), but with WiFi . And it is much faster than with slow Bluetooth technology.

How to transfer photos, music or files from iPhone to Android (and vice versa)

Above: Passing 23 photos from the iPhone. Below: Receiving the photos on Android. 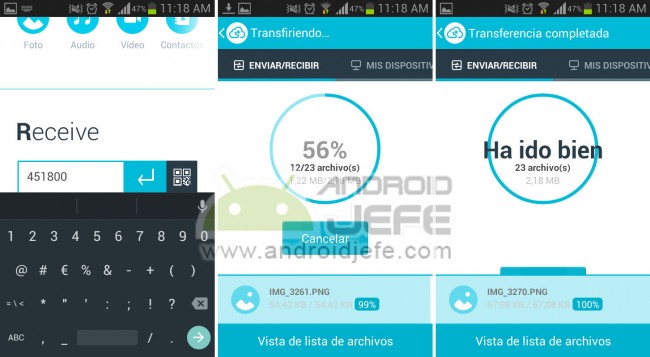 Above you can see an illustrated example of how to send files from iPhone to Android with this application (one of the best for this task). What has been done is to pass photos, but you can send any type of files. The process is identical if you want to do it the other way around, that is, share files from Android to iPhone.

To perform another file transfer, the same process is performed. As we said, the process is the same for sending files from Android to iPhone or from iPhone to Android.

The only requirement is that both devices are connected to the same Wifi network.

This app is not only useful to connect an iPhone with Android and transfer your things. I use it a lot to pass large files between two Android phones, because it is much, much faster than with Bluetooth. 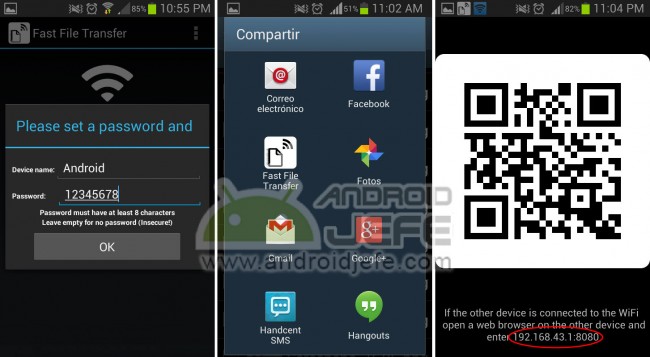 Above: Sharing an image from Android. Below: Receiving the image on iPhone.

In short, this application creates a Wifi access point on the Android phone and the iPhone must join that access point to get the shared file or files. The long version is explained below.

To use Fast File Transfer it is necessary that both phones are close due to the limited range of the Wifi network created by Android.

Send any file between Android and iPhone

Both applications are used to send any type of file. It doesn’t make much sense, but I sent an APK between one phone and another, which serves to demonstrate that any file can be shared.

Note : The tests of these applications were made with a Samsung Galaxy S3 with Android Jelly Bean 4.3 and an iPhone 4 with iOS 7. This can probably also work between an Android device (tablet or smartphone) and an iPad or an iOS device on general.

3 ways to FIND an iPhone from Android

Checkra1n allows jailbreaking the iPhone from a rooted Android