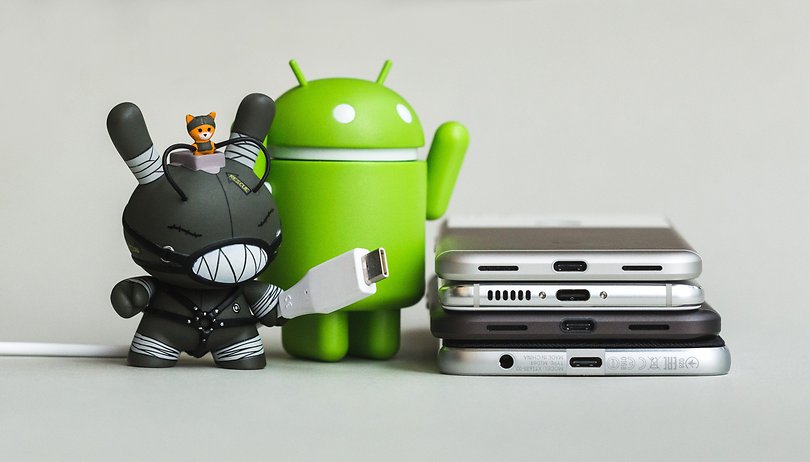 The Type-C connector is the successor to the micro USB connector. In 2017 it finally arrives in the smartphone middle class. We have had good experiences with him in our first years, show them in the new video and discuss with you why he is so much better than the predecessor.

The USB Implementers Forum, the industry association behind the connection, has learned from the errors with Micro-USB and better specified Type C. Chargers with Type-C connection are faster through the bank and usually charge your smartphone with 15 watts. This is five times faster than with some chargers with the old connector. And best of all: it still protects your battery.

2. Type C loads back and forth

The two ends of the cable not only look the same, they can also do exactly the same at both ends. That means you can determine in which direction the current flows. In some cases, this leads to funny results, so that your smartphone charges the power bank at once.

If you still have enough juice for the next few hours, you can give a little energy to your friends’ cell phones. To do this, put both smartphones together and control the flow of electricity. You open the menu for this via the pinned notification.

Do you want to quickly copy pictures or music from one smartphone to the other? Android Marshmallow and a Type-C connector are the ideal prerequisites for this. Android recognizes that there is a smartphone at the other end and offers you to share your files.

On the device on which you want to receive the files, you have to open the file explorer. It is preinstalled as an app on smartphones from many manufacturers. Otherwise it is in the memory settings under Browse .

What is behind the plug?

USB (Universal Serial Bus) is a standard that specifies cables, connectors and digital data exchange. The first version dates from 1998 and replaced several previously common PC interfaces. The USB Type-C connector has been defined since 2014. This has more connections than the predecessor, which are arranged symmetrically. So it doesn’t matter which direction you plug the cable in.

There are a lot of differences between the different plugs and the USB versions. They have different electrical specifications and data rates. The USB A and B connectors only have 4 connections, whereas USB 3.1 Type-C has 24 connections – this is necessary to support higher currents and faster data streams. With the separately specified USB 3.1, the speeds increase up to 10 GBit / s and there are new ways to supply devices with power.

The specification of the Type-C connection stipulates that you can insert the connector 10,000 times without it being damaged. If you use it twice a day, it lasts for over thirteen years. In order to cope with this specification and the increased current flow, USB-C cables are usually thicker than the classic cables.

So far, most Android smartphones have had a micro USB connection. The devices usually charge with 5 volts and around 2 amps. There is only a higher charging speed outside of the USB specification: Qualcomm Quick Charge, Oppo Vooc or Samsung Adaptive Fast Charge are manufacturer standards that only work on devices from one brand. The Verge takes a quick look at the rapid-charging mess. The Verge✔@verge

Why does USB-C suck so much?

With the open, license fee-free industry standard Power Delivery, the Type-C connection allows an energy supply of up to 100 watts; limited by cable, power supply or target device. In order to minimize the development of heat and aging of the electronic components, standard-compliant devices continuously negotiate voltage and current. Pay attention to the USB Charger logo , which was agreed in August 2016.

AndroidPIT regularly tests chargers and power banks that use the new standard to your advantage. Your smartphone loads faster and more gently with them. But also pay attention to the quality of the cable. Google employee Benson Leung has already tested over 100 cables, some of which have caused damage to one of the connected devices.

HDMI signals and audio can be transmitted

The Type-C connector could replace many other cables. The certification for a number of signals and protocols has already been completed. This includes VGA, DVI, or HDMI, since the Type-C connector imitates itself like a display port including its protocol conversion. Of course, this presupposes that there is appropriately equipped hardware and software behind the connection. The explanation is also available in official documents.

Audio is also becoming a big issue now that the old jack plug is disappearing bit by bit; See Moto Z . Here the USB Implementers Forum came to a standard at the end of September 2016 . The USB Audio Device Class 3.0 Specification provides for digital audio transmission. Corresponding Type-C jack adapters would have to have a digital audio converter. After all, this would be compatible with all your Type C devices.

More and more smartphone manufacturers are installing a USB Type-C port. But unfortunately they mostly only implement the USB 2.0 standard electrically, not the current USB 3.1 standard. This interferes with the transfer of large amounts of data from device to device, since the internal memory of most smartphones now exceeds the around 30 MByte / s of a USB 2.0 connection.

To be observed with Type-C accessories

Are you using a device with USB Type-C? What experiences have you had with the new standard so far?