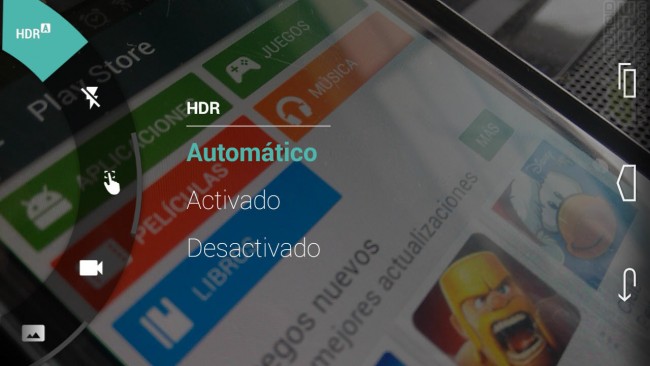 Almost a month of use with the Moto G Second Generation. It has been the replacement of my Samsung Galaxy S3 mini during these last weeks, in which I have been able to appreciate the strengths and weaknesses of this cell phone (the good and the bad).

The difference between the second generation Moto G and the first generation (the original Moto G that came out in 2013) is that the 2nd Gen has a larger screen (5 inches vs. 4.5 inches), has larger cameras resolution (rear: 8MP vs. 5MP; front: 2MP vs. 1.3MP), it has a slot to put an external SD card (the first moto G does not have this) and it comes with stereo front speakers. In the rest of the technical specifications they are basically the same (including the fact that both do not have 4G / LTE). 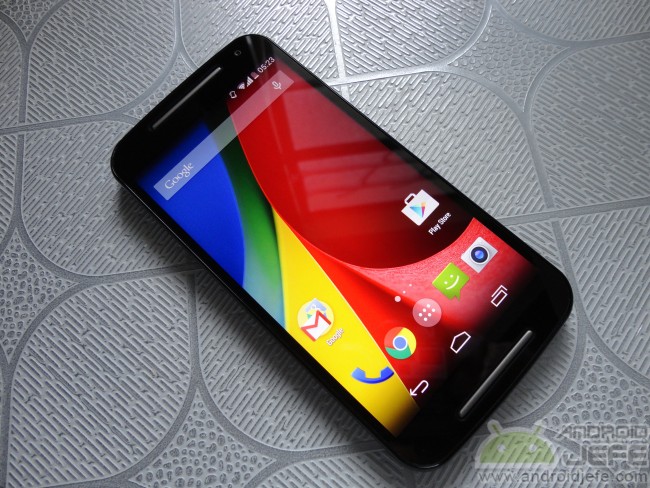 The 5-inch screen of the Moto G Second Generation provides an extremely pleasant experience, especially if it comes from a smaller screen, as in my case I come from an S3 mini with a 4-inch screen. Uncomfortable to use the phone because of this? At the beginning yes, but like everything, it’s just a matter of getting used to it. I know that the phone becomes less portable than a smaller one, but for a large screen it is worth it. 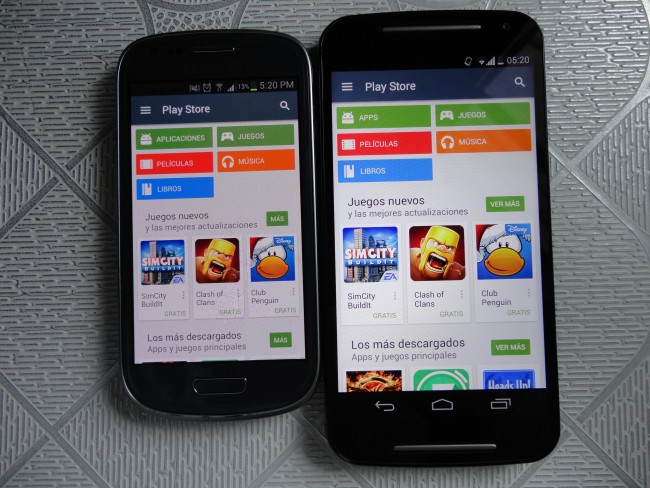 The IPS LCD screen offers lower image quality than, for example, a Super AMOLED screen like the one that some Samsung Galaxy have. AMOLED displays deliver brighter, more vivid and even realistic colors if you like. The colors of an LCD screen like the Moto G are a little more subdued. Here I leave a couple of screenshots, where you can see this difference between the screen of the Samsung Galaxy S3 mini vs. Second-generation Motorola Moto G (Super AMOLED vs. LCD IPS, respectively).

Of course, this weak point of the Moto G is only noticeable if you have an earlier reference to it.

The sound of the Moto G 2nd Generation is immersive , not so much because they are stereo but rather because they are intelligently located at the top and bottom ends of the phone, at the front. Stereo means that it has two channels: this feature is especially noticeable if the audio has parts recorded by one channel and the other independently. Each part will be heard separately on one or the other speaker of the Moto G.

Audio is much more accommodating on the Moto G, compared to, for example, phones that have a single speaker located in the rear. I repeat, this is not necessarily due to its stereo capability, but mostly due to the location of both speakers in the cell phone. Hearing the sound from both speakers instead of just one provides a more ‘surround’ experience. The fact that they are located on the front prevents me from having to flip the phone when I turn on the speaker for calls or want to hear music more clearly.

The images speak for themselves. In this photo gallery you can see some examples of photos taken with the rear camera of the Second Generation Moto G, in full resolution.

The Motorola Moto G of the second generation does have a slot to put an external micro SD memory card. This does not exist in the first generation Moto G or 2013.

Ergonomic and pleasant to have in hand, despite the fact that its weight is not very ideal. It’s a big phone but the curved back panel design helps a lot to get used to the grip. Speaking of aesthetics, very elegant. Great work done by Motorola in this regard. The 3.5mm headphone jack and micro USB connector slot are perfectly aligned in the middle of the chassis. 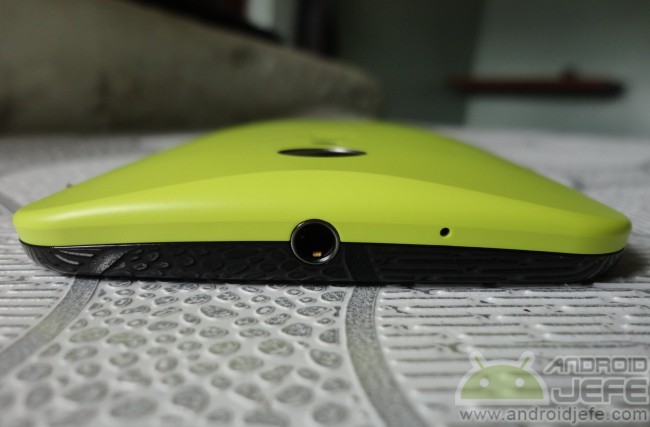 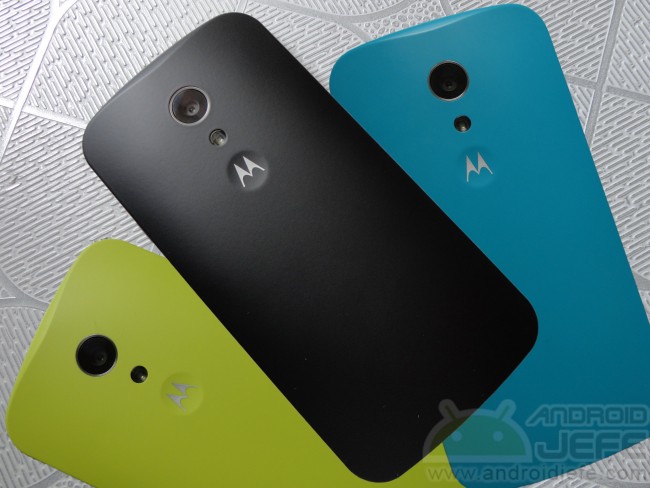 The interchangeable back covers (EYE, which are included in this model and are 3 IN TOTAL) give an even more attractive touch to the cell phone. This may seem trivial but it gives an unusual touch to the phone, in a world where most devices are marked by dark colors. 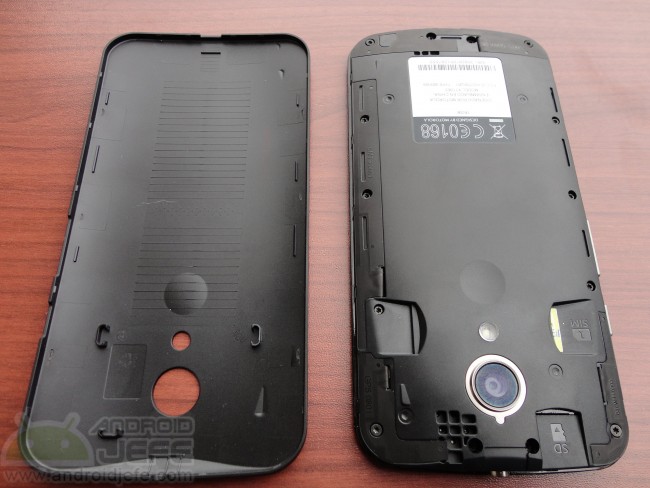 The battery is not CONVENTIONALLY removable. Technically it is possible to remove it, but it is necessary to send it to a technical service or to have all the tools, wisdom and knowledge necessary to remove it. Obviously it is a point against talking about design. Since it is no longer as easy to remove the battery as in removable battery phones, the solution that is left in case of phone freeze, lock or strange screenshots, would be a forced restart by holding down the power button for 10 or 20 seconds in a row, or 120 uninterrupted seconds when the phone is connected to the charger.

This is where the Moto G2 has problems. Motorola increased the size of the screen compared to the Moto G1, but not the size of the battery. It’s still 2070 mAh, making it virtually impossible to end the day without charging it twice. In moderate – demanding use, the phone can last 7 to 9 hours. With full charge from 9 in the morning, at 5 or 6 in the afternoon I have already had to charge it again.

Generally speaking, this version of Android KitKat by Motorola is very good, mostly because the phone is satisfyingly fast, fast and smooth when switching between apps, opening files and browsing the phone. It will have only 1 GB of RAM but it is very good in this regard. Perhaps this is mainly because it has Android KitKat 4.4.4, a version of Android optimized to work even on low-end phones, which is almost pure since Motorola does not modify it much compared to the original version offered by Google, and not overloading like it does for example Samsung. In addition to Google apps, it doesn’t come preloaded with useless apps or bloatware.

Efficient but incomplete. The dialer and the message management application are fast and practical, but are somewhat incomplete. In them I do not have the option to block incoming messages or calls, for example. They are very good for managing calls and SMS, but if you need advanced functions  you must install a third-party application from Google Play.

The launcher is, in more digestible words, the home screens and the app drawer. Like the rest of the software, it is fast, but very basic. It lacks customization options. In this launcher you will not have the option to sort and hide the applications in the drawer. At most you have the option to change the wallpaper and add widgets. Since this second-generation Moto G is remarkably fast, I think you can afford to use a replacement launcher that is more customizable. Nova Launcher is a good alternative.

Quick, very fast! It is one of the things that stands out the most in the Moto G software. By default the camera is set to autofocus, but in the application options you can choose manual focus and exposure. After dragging the focus point to the desired position, you touch the screen again and capture is immediately performed. Burst photos or one after another? Just hold down on the focus point to take multiple shots. The camera has panorama mode, HDR setting, timer, among other settings.

With the Motorola Migration app that comes pre-installed I was able to easily transfer music, videos, images, messages and call logs from my previous Samsung Galaxy S3 mini to the Moto G. The Alert and Assist applications from Motorola that also come pre-installed (the only ones that Motorola imposes on the cell phone) are interesting tools that allow you to quickly send an alert to a pre-configured contact in case of an emergency (Alert), and put the phone in silent mode automatically, based on the event schedule made (Assist).

This Second Generation Moto G is preloaded with all Google applications. As they are factory apps, they cannot be uninstalled (unless we root the device). Perhaps this is not necessary since most Google Apps like Chrome, YouTube, Maps, Keep, Gmail or Play Music are always very useful and will surely become your best allies in the Moto G.

There are a few details out there that are not understood by KitKat, such as having no option to show the battery percentage in the status bar.

The Moto G doesn’t come with a pre-installed file explorer, so you’ll need to install an app for this. ES File Explorer is a good alternative.

Regarding the update of the phone, I should recommend as much as possible to buy a Motorola Moto G that is a global version or a United States version ( Global GSM or US GSM , which can be found on Amazon, for example). These versions receive the fastest Android updates. Other versions of the Moto G, such as the Colombian version of the Claro operator that I obtained (unlocked / released version), takes weeks and even months apart to receive updates. Right now I am still waiting for the update to Android 5.0 Lollipop, while the global or USA version of the second generation Moto G already received it a while ago and has even started receiving Android 5.0.1.

Conclusion
Good, nice and cheap. That is in summary the second generation Moto G. It has some pretty cool hardware / tech specs for a phone that costs less than $ 200 on Amazon. Nice and elegant design. Speaking of software, excellent in terms of fluidity and speed. Pre-installed apps come with what is necessary and fair, yes, but that makes them fast too. In case you want something more complete, the Play Store is there available to find a world of alternatives. The second-generation Motorola Moto G remains (continuing the legacy of the first-generation Moto G) the best budget Android phone you can buy right now.

5 things you MUST know about your Motorola (EJ: Moto G)