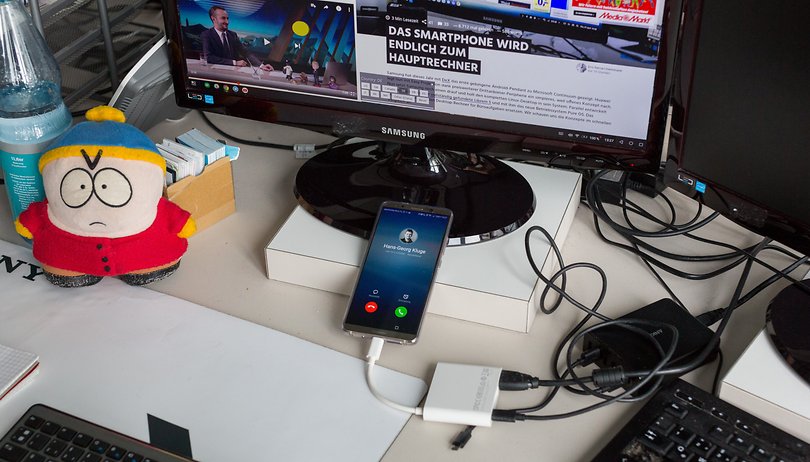 With Easy Projection, Huawei wants to transform the Mate 10 Pro into a desktop replacement. I took a closer look at the feature and see great potential. Unfortunately, the first implementation is still patchy in many ways. Let’s take a look.

For our easy projection test we have the Mate 10 Pro with software version C432; this is the first patch after the press samples were awarded on October 16. We connect it to our Full HD monitor Samsung SyncMaster S22B350 with the adapter that comes with the MateBook X. Power for charging comes from the Anker PowerPort + 5 .

I use the Speedlink Carex keyboard and the matching Jixster mouse as peripherals. Once paired, they connect to the Mate 10 Pro almost without delay when switched on later.

After connecting the cables, the conventional clone mode is shown, in which the smartphone display is shown 1: 1 on the HDMI screen. The system switches over after a few seconds. Then the Mate 10 Pro recognizes the display and starts Easy Projection. The smartphone then loads the appropriate touchpad app.

Operation with a touchpad as a mouse replacement and on-screen keyboard as a replacement for a physical one is sufficient as a makeshift. If you only want to start a certain app and make simple clicks in it, such as giving a presentation or controlling a picture gallery, that will be enough. However, if you want to write texts, real PC peripherals are advisable. Thanks to Android, almost any accessories can be connected.

If you don’t touch the screen of the smartphone for a while, it darkens black. This is a good thing, since the AMOLED could otherwise suffer permanent damage in the form of burn-in effects.

If you have to change the layout of the physical keyboard, you can find the link to the corresponding setting in the form of a notification. The de-keyboard, which was incorrectly recognized as a US keyboard, could subsequently be configured as a German keyboard so that Z and Y are no longer interchanged and umlauts are available again. Interestingly, the layout of the on-screen keyboards Gboard and SwiftKey has to be defined so that the Bluetooth keyboard is interpreted correctly.

In general, Android is well designed to operate with a mouse and keyboard. However, Huawei could better expose many of those features for easy projection use. So the setting for the keyboard layout could be hidden less, just like the regulation of the speed of the mouse pointer. The latter can be found in the smartphone if you search for “pointer”.

If I had free wishes …

In general, I lack a separate settings menu in the Easy Projection. I would then change keyboard shortcuts, move the bar at the bottom to a different location and edit its elements. And I would set what notifications I get there too.

And if we are currently dealing with special requests: In addition to power and HDMI, the perfect easy projection adapter would also have a (micro) SD card reader, three USB 3.0 connections and a four-pin audio connection for headsets with 3.5 Millimeter jack.

In the long term, Huawei should strive to allow the connection of a second large screen. And Huawei must also include Android user profiles; so far only the main user can use Easy Projection. Additional users may only use normal HDMI output.

Multitasking is easy to handle

The window manager allows extensive multitasking, but could also be better. Typical movements such as dragging a window to the edge of the screen have no effect where other operating system interfaces automatically adjust the windows to half the screen.

Notifications are still only shown on the smartphone. On the big screen, they are only identified as a subtle red dot next to the clock.

The apps from the Play Store optimized for small screens are noticeably resistant to use in a desktop environment. And most apps deliberately ignore mouse and keyboard operation. I would have hoped more from Google Chrome in particular. It lacks the bookmarks bar or pinned tabs because it starts in tablet format, but not in desktop mode.

The app launcher at the bottom left of Easy Projection also raises questions. Why does Huawei specify a folder for third-party apps when all the apps are there anyway, instead of leaving the user to sort them? Why are apps such as Play Store, YouTube, presentations (!) Or Google Calendar missing in the overview, but can still be started via link or notification in Easy Projection mode and then pinned in the bottom bar for quick starts?

How does Easy Projection perform?

If a smartphone should really serve as a replacement for the work computer, it should also be fast enough for the tasks required. In our case, this is limited to working with the browser and some Google Sheets. This means that RAM and a fast internet connection are required. According to the Android overview, the 6 GB RAM was not even half full in those scenarios and the WiFi performance at Huawei is always outstanding, after all they are the supplier of numerous WiFi components in modern routers.

However, much performance is of little use if it is difficult to handle. There are major shortcomings in the inadequate window manager as well as the partly missing, partly partly simply inadequate optimization of the apps for working with a mouse, keyboard and a low-DPI monitor.

You can save web applications since  you can start them in the Chrome browser by clicking on the Request  desktop version check box. However, this does not solve the problem that there are many professional applications neither in the Play Store nor on the web, but only for desktop operating systems. Here, Huawei would have to counter with remote solutions or a virtual environment, as Samsung is currently trying with Linux on Galaxy .

Easy Projection tries to save the session even when you disconnect the cable. So if you change your place of work, after plugging in again, you can continue exactly where you were before changing the screen. But the content of unsaved online forms is lost. And if you have opened an app on the smartphone in the foreground, it will be skipped when Easy Projection starts, i.e. it will not start on the large screen.

Some apps like Netflix throw ominous error messages and do not allow playback on the large screen. Of course, the video can still be started on the small screen. In any case, the sound is looped through the HDMI channel to the large screen. If the monitor has no speakers, however, the sound is still output on the Mate 10 Pro. If your keyboard has multimedia keys, you can use them without restriction.

I was able to work sensibly with the Huawei Mate 10 Pro as a replacement for my work computer for a day. However, I would have been at a loss when cropping photos, compiling screenshots or reading a memory card. Too much software is still not available for Android devices and it doesn’t look like it will change in the short term.

However, if the majority of your work can be done with Google Docs or the browser, Easy Projection can be a good alternative to a desktop computer. Then, however, Huawei has to improve the low-DPI support and the window manager and fix the problem that many of the installed apps are not shown in the app overview.