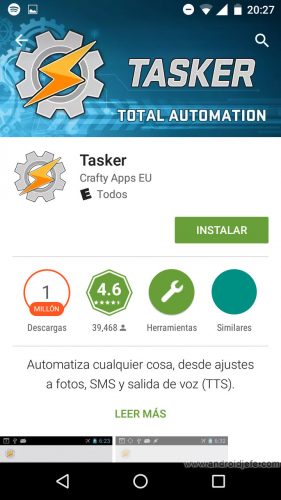 If an application has been purchased from the Play Store, it can be downloaded on multiple devices, in addition to the device that was used for the purchase. It is not necessary to buy it for every device used.

There is no trick in the way for a purchased application to be used on multiple phones. A purchase made in the Play Store is NOT registered in the cell phone that was purchased. The purchase is registered in the Google account that was used for the purchase. That said, a purchased application can be downloaded to a different cell phone than the one used to make the purchase, as long as the same Google account is used. In other words, it is not necessary to buy the application again to use it on a different cell phone. 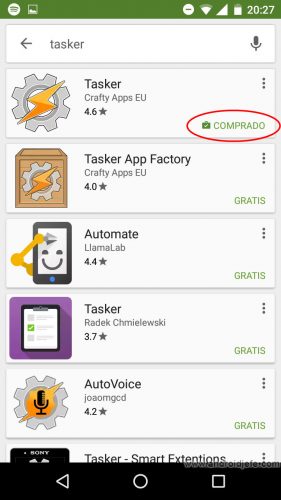 Previously purchased «Tasker» application appears as such on a different cell phone than the one used to purchase it.

The first and only requirement then will be to register the Google “buyer” account on the new cell phone:

Once the Google account “buyer” has been successfully registered on the new cell phone, open the Play Store application. There it will be necessary to display the left side menu and leave the newly added Google account selected. Finally, search for the purchased application. To the right of the application name, the legend “Purchased” will appear. When you tap on it, the “Install” button will automatically be available to download and use the app.

Purchases are recorded in the Google account, not in the device used to buy

As indicated before, it must be clear that purchases in the Play Store are recorded in the user’s Google account, not in the device itself. Therefore, wherever that account is entered, applications previously purchased with that account can be downloaded.

This way of operating Google Play is not new; It has existed for several years. What is recent is an option that allows you to share with the «family» the applications, games and other content purchased on Google Play. Apparently this function will allow you to share with up to 6 people a purchase made in this store. Obviously, in this case each person will have a different Google account. The operation is not entirely clear at the moment, because although this “Family Sharing” option has been announced, Google has just started offering it to some users. In the coming days and weeks this feature will surely be crowded and you will be able to see exactly how it is going.

3 basics of buying games and APPS on the Play Store

How to pay with another account in Google Play Store