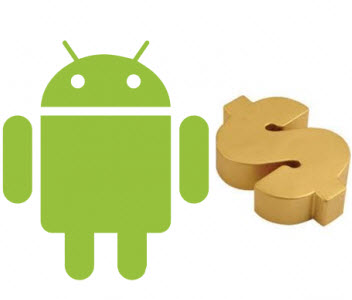 Before getting involved in the world of mobile application development, you may want to know some numbers that can be generated with this activity. Can you live from creating apps for Android or iPhone? Can you pay your expenses and hobbies without problem? Maybe buy you a new car?

Some reputable sources have made estimates of the profits that can be made by creating mobile applications. In summary, they affirm that you can win for the times that your app is downloaded, as well as for the monetization that you integrate into it. As far as money is concerned, it is better to develop for iOS than for Android.

How much does Google and Apple pay for the downloads of your APP?

Once you have created your application, you will want to publish it on Google Play and the App Store, to expose it before hundreds of millions of people around the world.

The idea is that you start receiving money for such an action, because according to Forbes, these stores pay you for each download made. In 2013, this important medium published that Google pays almost 2 cents for each download ($ 0.018), compared to the much better 10 cents ($ 0.10) that Apple pays.

The number of times an app is downloaded also varies from store to store. It is estimated that on average an app receives 60,000 downloads on Google Play, compared to 40,000 on the App Store. As an average developer makes five mobile apps, multiplying all these values ​​we have an idea of ​​the potential return. 5,400 dollars to develop for Google Play, vs. the $ 20,000 to develop for iOS.

Revenue from monetization of your APP

In addition to the aforementioned income from downloads, we must add the income from the monetization of the APP. That is, money received for embedded advertising (through systems such as AdMob) or possible purchases in the app.

An older Business Insider report estimated numbers on “advertising, mobile commerce and other charges” revenue built into a mobile app. For every 90 cents earned on Android, an iOS developer earns $ 1. Being more practical, an average developer earns $ 4,700 a month developing for Android compared to $ 5,200 generated by a creator on iOS.

Unfortunately these numbers are from several years ago and there is no reliable updated information. Although some things haven’t changed since then (the division of resources for app purchases, for example), use these values ​​only to get an idea of ​​the income that a developer receives.

3 basics of buying games and APPS on the Play Store