You don’t need a PC to do many of the things that were previously done through a computer. Today Android devices are so powerful that they even give us the possibility to change the format of audio and video files on the same mobile phone, and do without a PC for it. The Format Factory application is a tool that will allow us to do that.

Such application is developed to allow converting audio and video files stored on the Android device, to another type of file. For example, with it you can change a song in MP3 format to ACC format. By doing this, the song will take up less space in the phone or tablet memory. It might make sense to do this if you later want to pass the song on to a friend who has a low-end mobile phone that doesn’t play MP3s, or doesn’t have much storage space.

How to use
Converting an audio or video file is easy with Format Factory. On how it works, well, to start press on the button with the «+» symbol at the top and then choose if the file to be converted is audio or video. A browser will open where you can choose the file. To use it, keep in mind that we can change the directory using the small horizontal arrows that appear in the upper left. 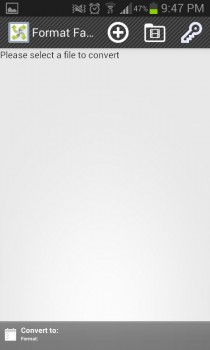 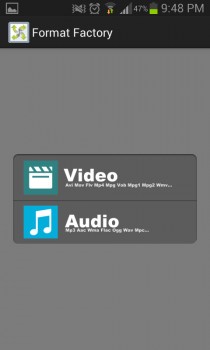 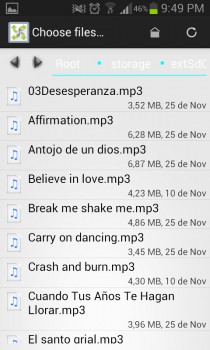 Once the file has been chosen, a screen will be displayed where, in the upper part in light blue, you can see the data of the file and, in the lower part, the parameters that you want to have for the resulting file.

For audio files, the codecs supported by this application (the types of files it can be converted to) are MP3, ACC, MP2 and WMA. For the rest of the parameters (Frequency and Bitrate), you just have to know that the smaller its value, the size of the resulting file will be smaller, but also of lower quality. The higher its values, the greater its size and the higher the quality as well. 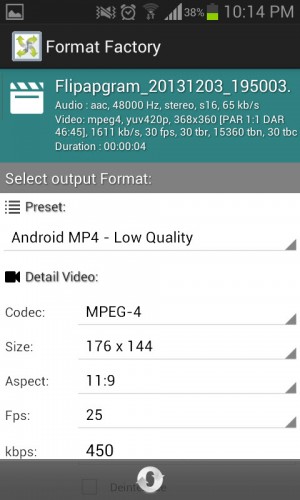 For video there are more settings available. The same previous rule applies: the smaller the value of the parameters Size, Aspect, FPS and Kbps, the smaller the video and the lower the quality, and vice versa. Instead of adjusting each parameter individually, you have the possibility to choose a “Preset”, which is nothing more than a video format with predefined parameters. You can select one of them depending on where the resulting video will be played. The available options are: Android (MP4, H264, 3G2, ASF) to audio only, AVI, DVD, FLV, iPad, iPod, MP4, MPEG1, MPEG2, PS3 and WMV. Several of these presets are available in high, medium, and low quality.

Once everything is adjusted, it is just a matter of pressing on the “O” that appears at the bottom and the file will begin to convert. Depending on the size, it may take a long time or a little. Since this is a CPU intensive process, the device may slow down or “lag” during the conversion.

Once finished, you can play the resulting file within the same application, and also see the size that has been achieved after the conversion.

Concluding …
Format Factory is an effective application although, you would like it to have more codecs available for audio files. It is free and has advertising but sometimes it is invasive because sometimes it shows the advertising in full screen. It can be useful for sharing compatible files between different devices that do not support the same types of files.

Convert MP3 to RINGTONE or ringtone on your Android

How to convert a video to GIF on Android

How to unzip RAR and ZIP files on Android (and compress)