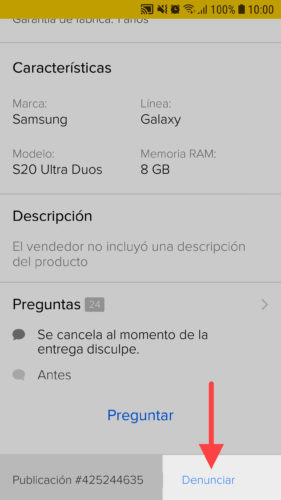 Mercado Libre is a good page to quote and buy products of all kinds, including mobile devices and technology, at the best prices, but also a website where many “sellers” can register and cheat the most novice or naive, of which at least two from my close family circle have been victims.

Generally, the majority of people scammed in Mercado Libre have the WRONG idea that on this site they can get bargain prices or auctions. You can get competitive prices , but don’t expect anything to be “given away”. They can also be fooled by the site’s reputation system, which was useful in the past, but is now easily manipulated. Finally, they can let their excitement about a certain product and its price dominate them and try their luck, risking their money without being sure of what they do.

I have been buying and selling at Mercado Libre for several years and, without trying to brag, I usually know at first glance a scam of a real product on the site. The main things I look at before I even click “Buy” or pay money to a seller are as follows. 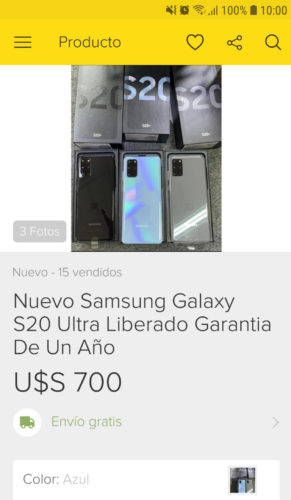 Just by seeing a price too good to be true, of which you will surely already be well informed, you should consider a product on Mercado Libre as discarded.

For example, in the image above you see the publication of a Samsung Galaxy S20 Ultra, whose normal price is at least $ 1,300. A price of just over half for this new device is totally ridiculous. Do not let your emotions dominate you and trust your brain more. This is a pure and simple scam. 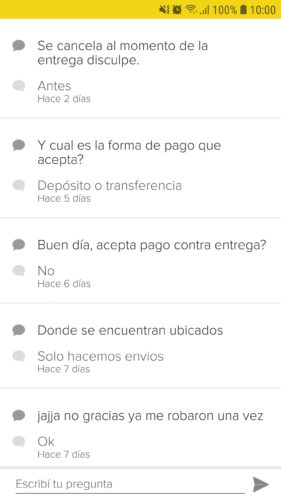 Serious sellers at Mercado Libre have a physical location and have no problem selling you in person. Those who do not have a physical store also have no problem visiting you at home to make the transaction. In the worst case, they will be given the option of seeing them on the street or in a public place. That is, a legitimate seller never hides and will allow you to locate it in some way for the payment and delivery of the product in person, which is the safest way to buy.

When it comes to fraud they will always tell you that basically they cannot appear in person, they only ship and they will never indicate an address. The deception is evident. You can use the Ask option in the post to find out, or simply see questions answered by other users.

In order to “send” you, you must deposit or make a money transfer to a bank account. In some cases they will accept that you pay them only a part of the value before shipping and the rest when the product arrives, something obviously unacceptable for a serious seller. Many naive or innocent people make the mistake of making payments to these types of people. Do not make that mistake, even if it is a low value subscription, as it will be an incentive for these sellers to continue to scam other people.

Check the questions section of the post to find more evidence of what was said before. That is, find out if the seller is hiding behind a “virtual store” that only makes shipments (home deliveries) and does not accept payment on delivery.

You may also find irregularities in their responses, as in the illustration above, where the seller offers a Samsung Galaxy S20 or S20 plus, both of which are $ 50 more expensive than the Ultra version, even though they are of lower hierarchy. In addition, the price of one and the other is different and is around 1000 dollars.

It also states that the Samsung Galaxy S20 has 512 GB of storage, when for this model there is only the 128 GB version. 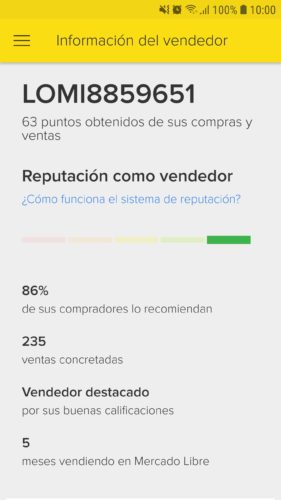 The Mercado Libre profile of this seller says that it has sold 15 Samsung Galaxy S20 Ultra devices. It has an excellent reputation (green) and even a “featured seller” badge thanks to its 223 sales and 86% recommendations from its buyers. So many people can’t be wrong, can they?

Unfortunately, the reputation of a seller on Mercado Libre is unreliable. Anyone on the site can generate that number of sales and good reputations in just a few hours. 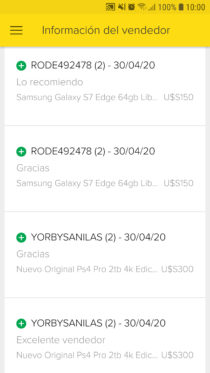 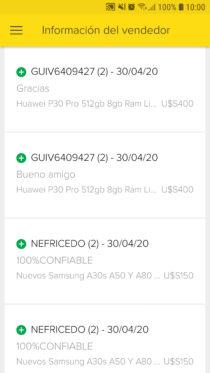 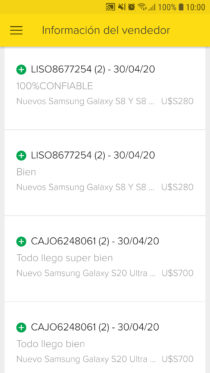 In the case of our seller, the positive ratings on his profile are generated by himself, taking advantage of the current flexibility of the platform. If you check the images above you will notice it.

It didn’t take me more than five minutes to create a post similar to the one mentioned at the beginning. To make 15 Galaxy S20 Ultra devices sold appear on my profile, getting positive ratings from all those sales and an excellent reputation would have taken just over an hour. 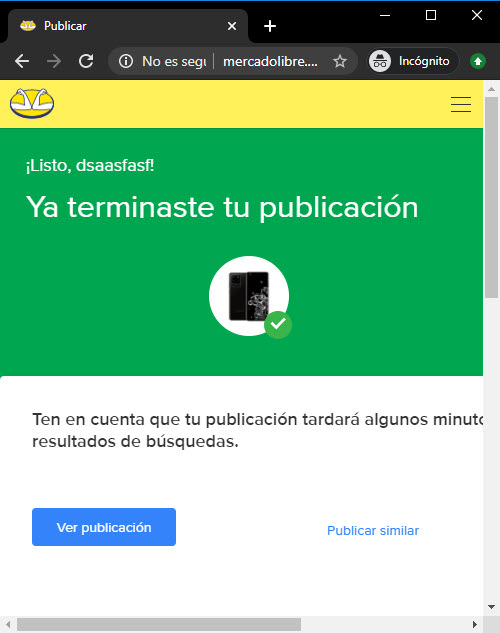 If you review the seller’s profile a little more, you will find more evidence. In our example, you only have five months selling on Mercado Libre. True featured sellers are several years old. 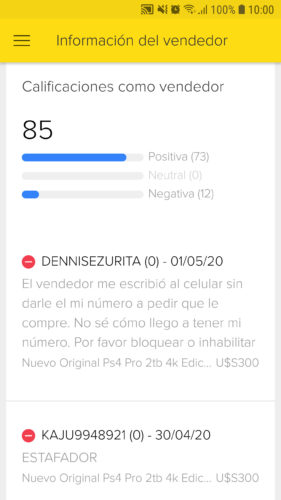 A little further down you will find other clues, such as 16% of negative ratings in this example, which are of the “Scammer” or “It’s a scam” type. I have found qualifications of the type “I was robbed today I present a complaint to the prosecution”, “Scammers do not buy, they are foreigners, two Venezuelans and one Colombian, make the complaints”.

If you find this type of publication on Mercado Libre, use the “Report” option and explain the anomaly you see. This will not prevent the seller from doing the same again, assuming Mercado Libre cancels their accounts, but will frustrate their activity.

If you have already been the victim of a scam, you can file a complaint with the Prosecutor’s Office in your country, with the name associated with the bank account in which you deposited the money.

Unfortunately, Mercado Libre is no longer what it was a few years ago, when it verified the accounts of sellers much more strictly, with verifiable home address and sending of an identity document. Only after that and after review your account was approved to sell. With the virality of OLX, Mercado Libre was forced to provide the same sales facilities so as not to lose users, which has made the platform fill with several scammers who have been doing this for years.

How to know if a cell phone is ORIGINAL (and new)