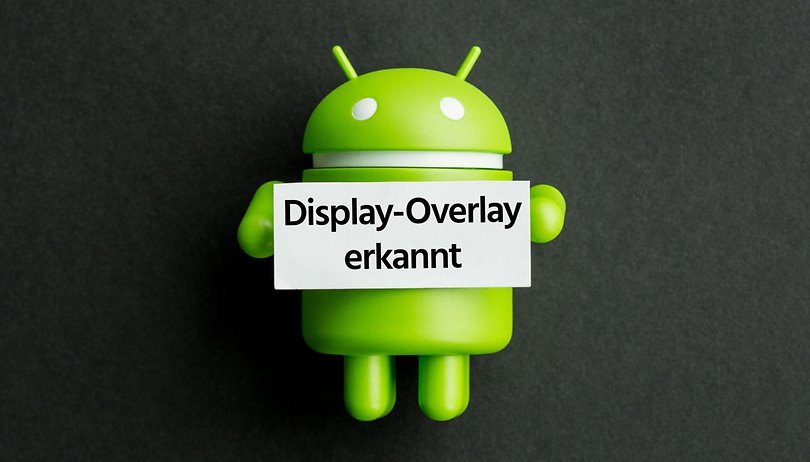 The problem : You start an app and this requires new permissions. Android warns you that a display overlay has been detected . You should deactivate the setting. The warning message gives you only a few clues to the cause of whether you should fix the problem and how exactly you would do it ( directly to the solution ).

The reason : The error message “Display overlay detected” appears when you use a floating ( floating ) app such as the bubble ( chat head ) of the Facebook messenger. Another app with overlay permission would be Twilight, which reduces blue tones on the entire display. These are desirable uses of the overlay authorization, in which the message “display overlay detected” can be safely ignored.

Affected smartphones : Problem descriptions for Samsung and Motorola smartphones can be found on the Internet. It’s probably a problem that can occur with many brands. AndroidPIT was able to simulate the behavior on a Vodafone and a Samsung smartphone.

Causing apps : For us, the app drupe caused the problem, on the Internet and in our forum, apps like Clean Master , Lux or Twilight are also held responsible for the error message “Display overlay detected”.

When and why does the warning appear: “Display overlay detected”?

The technical background : Apparently it is a security measure from Android. Modern apps ask when they are set up whether they are allowed access to the memory, the phone or the camera. A display overlay could automatically confirm the request. Before such abuse takes place, you will be warned accordingly.

In the sad history of Android apps, there have been numerous examples of abuse of display overlays, in which ransomware overlays the entire screen with an “FBI warning” and renders your smartphone unusable. Milder variants use it for advertising banners permanently placed in the foreground. In both cases, the abuse brings the author money – at the expense of your user experience.

Google has identified this as a security risk. Therefore Android in the versions Marshmallow and Nougat from 2015 and 2016 respectively requires that no display overlay is active if you assign new rights to an app. If your overlay app ignores this restriction, the warning will appear.

Android Oreo brings the solution : Android Oreo has only really solved the problem of display overlays since 2017. Because with this version, Google Apps will no longer allow you to lay down on system displays such as the notification area or dialogs such as the rights query. The warning is then no longer valid. In addition, some manufacturers have implemented a solution that banishes all overlays to the background. The dialog for granting authorization can therefore never be overlaid.

For some smartphones that are affected by the error message, a software update has now provided a remedy –  see above . So check for new firmware ( Settings> About the phone> Software update ). If that doesn’t help, continue with the solution here:

Opens the setting called “Show via other apps”. At Samsung, the associated option is “Apps that can be displayed at the beginning”. Typically, this is how you get there:

Among other things, Samsung users have to go a different way, because you can’t find the right menu via the search:

and disables the option for all insignificant apps. You will be amazed at how many apps in your Samsung smartphone have overlay authorization.

Now you can start the app that asks for a new authorization. The warning message “Display overlay detected” should no longer appear.

If the error message “Display overlay detected” appears again, you will find an alternative way in the second part of this instruction how to fix or avoid the error .

Some apps such as Twilight, HeadsUp or Resource Monitor Mini must be allowed to appear above other apps for their basic functionality. If you have deprived them of these rights in step two, you can give them back the right way if necessary.

The steps above will help fix the display overlay issue in most cases. However, some users report that the steps above did not help. Fortunately, there is another way you can work around the problem: Android has a safe mode in which the smartphone does not start all apps immediately.

This can help if the annoying app with its display overlay makes it difficult or impossible to operate your smartphone. In safe mode you can set and withdraw the requested rights undisturbed as follows:

The steps above help in most cases, but not in every individual case. Many members of the AndroidPIT community have also struggled with this problem and have shared their findings. Here we have summarized the tips.

We are aware of at least two manufacturer features that are responsible for the problem of the display overlay.

Android allows manufacturers to make various adjustments. In this case, this makes it impossible to list every potential cause. Fortunately, the AndroidPIT community has found many tips and hidden causes that can certainly help you here. In this list, we list known apps that triggered the display overlay error message.

Fix “Display overlay detected”: With Root and Xposed it works

If one thing is true in the Android world, it is the statement: “It always works with root.” In fact, there is a module for the Xposed framework that can deactivate the error message “Display overlay detected”. However, the Xposed module turns off the security mechanism behind it, so you should only use it with caution.

This is not a short-term solution anyway: In order to use Xposed, you have to root your Android smartphone . The problems associated with this may not be worth the effort.

If you decide to do so, you have to find Xposed for your Android version. An unofficial port for Android Pie has been available since the end of January 2019.

The “Display overlay detected” problem can be solved quite safely with the tips above. Android updates often fix the problem because they can temporarily hide display overlays. A complete solution is distributed with Android Oreo, since Google changes the functionality of the system dialogs.

Did this guide help you? If not, give us your smartphone with Android version and tell us which alternative solution has helped you.